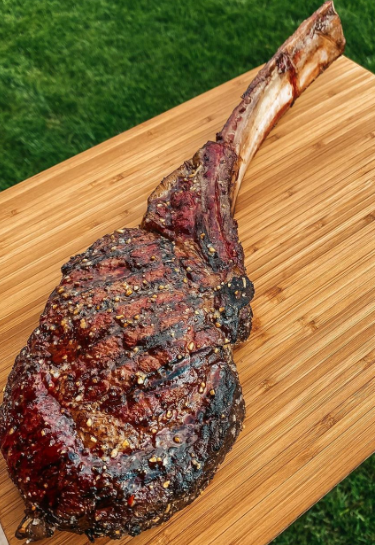 Mitchell Schwartz is an accomplished football player who is known within NFL circles as one of the game’s top offensive tackles. He was a 2018 first-time All-Pro and started every game last season for the Super Bowl champion Kansas City Chiefs.

But it seems as if more people know Schwartz for his hobby, which is to grill or cook dishes and share them on social media.

“It’s another way to interact with fans,” Schwartz said. “… [Fans] have an interest in how you play and how you’re doing on Sundays and Mondays and Thursdays, but they’re also interested in what you’re doing in your personal life. They want to get to know you better and that’s kind of an outlet for me to show a little creativity.

“Typically in most households someone is cooking a meal, whether it’s once a week or whether it’s every night. Everyone has a vested interest in good food.”

Schwartz has 95,000 followers on Instagram and nearly 65,000 more on Twitter, and people aren’t there so much for the football, at least not in the offseason. His tomahawk ribeye photo in May got nearly as many likes on Instagram as the photo of him and his wife, Brooke, kissing the Lombardi Trophy during the Chiefs’ Super Bowl victory parade. And his numbers have been on the rise during the coronavirus pandemic, as he provides fans with recipes to try while stuck at home.

Fans are following him for his grilling tips and recipes that can range from pastas and pizzas to grilled meats and French toast. He also posts his work to mitchinthekitch.blog.

Schwartz said engaging with fans is a big reason he posts about food to social media. A comment typical of those Schwartz receives came to his Instagram account after he shared a recipe.

“I just made your Pasta Carbonara and it is delicious. Even my majorly picky almost 10 year old daughter really likes it. Thank you so much!!”

Schwartz has been posting about food for years but has increased his volume during the pandemic.

“I made some dishes and I just kind of threw together a six- or seven-picture thing on Instagram and said, ‘Hey, here’s what I’ve been cooking lately,’ and people really liked it,” he said. “So I figured the next day I’d throw up another food thing and people still really liked it, and it’s just kind of grown from there. I’m definitely trying different stuff than I would have. That’s been the fun part is having all this time and being able to plan out recipes and try different things. I’m not professionally trained or anything. I do rely a fair bit on videos and learning about it. I’m definitely trying to do more well-rounded things.

“The thing people are struggling with is not seeing co-workers and friends, not having interactions. So you’re kind of relying more heavily on the social media side of it. Being able to do that has been a lot of fun. I actually have time to post stuff and respond to people and react. Typically, in a normal environment and work day, I’d be on the go and just kind of throw something [online], leave it and check back later to see if it was successful or not. But now you can see the cool commenting. Some people have particularly strong opinions about what you’re making. But for the most part, they’re kind of like, ‘Hey, that’s awesome’ or ‘I like to do this’ or ‘Have you tried this?’ I’m always looking for a better spice or recipe and that’s definitely been fun and rewarding.”

The Chiefs have featured some of Schwartz’s recipes on their website. They even put him into duty at a fan event at Arrowhead Stadium during the 2019 draft when he grilled burgers.

And Schwartz’s offensive line teammates have benefited from his cooking in the past. Pre-pandemic, he was almost always the one called upon to grill the steaks, brisket or burgers at their offseason get-togethers, which were usually held around the pool at Schwartz’s home in the Kansas City area.

“It’s the real deal,” Reiter said. “I’m a medium rare guy and they were excellent. Salt and pepper, I think, was all he had on there. I like it a little more on the plain side. I want to taste the good meat. It was the choice of meat he had there. I’m not sure where he got it from, but it was just tender. It was great.

Schwartz said, “It is fun having guys over and cooking for them. I tend at the pool parties to kind of get stuck with grill duties. I like it, too. It’s fun to do that. It’s just that when we’re into summer and it’s already 95 degrees out there and [to] throw another 450 in your face, it gets a little toasty.”

Schwartz grew up in California watching cooking programs, particularly “Good Eats” with Alton Brown. He would seem a natural now to participate in cooking challenge shows, but he will let football feed his competitive side.

“The things that I cook or am good at, I use a recipe,” Schwartz said. “I’m probably not as good at, ‘Here are your ingredients. Figure something out.’ I just follow recipes. I’ve got to find good recipes.”

He does plan to keep sharing with fans, whether they follow football or not.

“There are lots of people that like to cook and people that follow it, so I know they enjoy it,” he said. “There’s also an element to cooking that’s a little intimidating. People don’t want to go buy a brisket and screw it up and waste the money.

“Just trying to teach and have fun. In the offseason, we’ve got a lot of time off.”