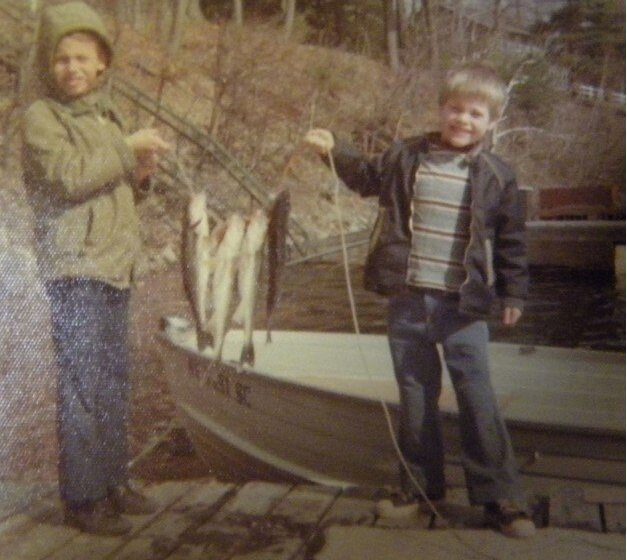 “While many a pickled pepper peck Peter Piper may have indeed picked, I ponder: How many pickled pecks would have Piper picked if perhaps Peter were picking dill pickle pike.”

My first youthful pike encounter was actually with walleyed pike, as opposed to great northerns. I’m not even sure Walleyes are technically really a true “pike”. Pickled or otherwise, I believe they are more a cross between a pickerel and a perch.

My Dad, younger brother and I used to fish the walleye run on the Great Sacandaga. We’d troll up and down, back and forth on the river, near where we kept Dad’s boat tied to our floating dock, out behind our rented grey stucco house, just above the bridge. We trolled with yellow bucktails in Dad’s little Starcraft, at first putt-putting along with my Grandad’s old 5 HP Scott-At-Water. Somewhere along the line, Dad upgraded to a new 20 HP Johnson that started a lot easier and worked a lot better.

The walleye run there on the lake could get heavy. There were always a flotilla of other fishermen trolling around us. Once I recall hooking into a nice walleye. Dad readied the net as he coached me on reeling the fish towards the boat. “Rod tip up! Rod tip up!”

When I finally succeeded in fighting that fish to the side of the boat, Dad reached down with the net to scoop my catch from the water. To the surprise of both of us, when he brought the net from the water, he had scooped not just one walleyed pike, he had three!

We spent a lot of time on that lake trolling for northern pike too. We’d go up by the spillway and troll, catching bass, perch and pike, just a young Forest Ranger Dad out fishing with his two young sons.

Dad was always on a quest for a big one. I recall he liked to tell us a story about DEC divers that once dove down deep on some Sacandaga repair project for the dam.

As my Dad liked to tell it: “Those divers came back up and said there were northern pike down there swimming around that were bigger than they were! After that all those DEC divers refused to go back down.”

I don’t know whether or not that was true. I do recall Dad also telling us that one of the world record northern pike had been caught in the Great Sacandaga. I’m not sure whether or not that is still the case. I know my Dad and his boys spent a lot of time trying to catch one of those pike. We caught some big ones, but never any quite that big. They all had one thing in common though- a mouthful of sharp teeth!

As a result of Dad’s stories though, I for a long time had a fear I never admitted. I was afraid of swimming in deep water. It was not an underwater encounter with Sharks I feared, as with most kids. I was afraid of getting bitten or eaten by one of those monster sized Great Northern Pike!

Once we moved from Northville to Lake Placid, our main fishing focus shifted from pike and bass to trout. Brook trout, rainbow trout, lakers & browns; Lake Placid, Mirror Lake, Lake Colby, the Ausable River, even canoe trips into Remington Pond. Father and sons, we fished them all. If Dad wasn’t working, we were always somewhere- fishing.

When we moved from Lake Placid to Saranac Lake, our fishing focused changed once again, from trout back to bass, and of course, northern pike.

We lived in a house on the corner of Stevenson Lane, by the Pine Street Bridge, on the Saranac River. My brother and I would fish down along the river bank with our friends. We caught bullheads and bass. We fished with lures and worms. Our favorite casting lures were red & white striped “Daredevils”. They were heavy and we could cast them pretty far with great accuracy. Nearly every kid had a few in his tackles box, different sizes. We could buy them at Blue Line Sports Shop with our allowance or newspaper route money. Or, if we got lucky, we’d find one someone else had lost, snagged on a rock or sunken stump in one of our river swimming holes.

Every so often, we kept a pike to cook and eat. Dad taught us how to clean them. We tried fileting them a few times, but pike are really bony. All of those little “Y” shaped bones made it tricky. In the end, we gave up on that and just cleaned and scaled them and, minus the heads, cooked the ones we ate whole.

I got pretty good at catching and cooking them that way. Once I even cooked one for Home Economics Class extra credit. I was in 8th grade at Petrova Middle School. Mrs. Irvine was our Home Ec teacher. I’m pretty sure I was not her best student.

I knew I would catch hell from Mom if I got a bad grade. After my “dolphin pillow sewing disaster”, I feared I was close to failing. I needed a rescue plan- FAST! So, one afternoon, after class, I went and caught a big pike and cooked it for Mrs. Irvine for extra credit. It worked! I ended up with a B-. Whew! That was close! I’m sure glad I did not have to take any more Home Ec classes once I got into high school.

Dad, my brother and I spent a lot of time fishing bass & pike on the Saranacs. We fished the lower lake, trolled up the river, made countless excursions into Weller Pond, always making a detour to troll around Little Weller. My Dad always insisted there must be a big pike lurking in the dark, murky, tannin stained, lily pad framed waters of Little Weller Pond. To this day, every year when we camp, we fish Little Weller. To the best of my recollection, no one in our family has ever caught any noteworthy fish there, but it’s still a Monroe camp tradition. Every summer, at least once, we fish Little Weller.

Our favorite pike spots though, are the river above the locks, and Middle Saranac. I can’t give away our exact secret fishing spots though, so I’ll leave it at that.

During his time at the DEC, I remember Dad talking about walleyed pike stocking efforts on Middle Saranac. I don’t remember the details, it was the 1970’s. I know they released a lot of walleye fry into that lake, hoping to re-establish a self-sustaining population. Dad said it was a struggle though, because for the most part, bass & northern pike just ate them. Dad was always a bit frustrated by the fact that those efforts did not produce any visibly tangible results.

Then one day, several years ago, my brother Ray, son RJ and I were fishing near the entrance to the river, up near Middle Saranac. One of us caught a fish. I don’t remember which one of us it was. We netted and boated it. I looked down. Surprise!

My brother Ray & son RJ dealing with a pike we caught on the river between the locks and Middle Saranac Lake while camping several years ago. About the 1st time dill Pickle Pike was invented.

I said to my brother “Ray! That’s a walleye!” It wasn’t overly big. 12-14 inches maybe. It’s the only one we ever caught up there. We de-hooked & released it. I told Dad about it when we returned home. Dad was well into his later years by then. He no longer accompanied us. He just smiled and nodded. “We sure did put a lot of them in there through the years.”

We catch a lot of perch and bass fishing on the Middle Lake. We’ve also caught more than our fair share of pike, including some big ones. I had one to the edge of the boat once that I swear had to have been at least 36 inches. My net was not big enough to handle it though. Unfortunately, that pike snapped my line before I could get it in the boat. So, technically, it didn’t count.

For those who haven’t, catching a big pike is a special challenge, especially if there are kids in one’s fishing party-it’s a great experience! They are aggressive and strong. Pike fight hard. They will make your drag sing. A big one will feel like a snagged submerged log doubling over a rod. Helping kids catch one is always loads of fun.

Our kids love catching them. They’ve all learned to carry pliers, use a net, and most important, to WATCH OUT FOR THOSE TEETH! We catch and release most of them, but as with our “Lemonade Bass”, every so often, one just doesn’t quite make it.

One day my brother, nephew and son returned to camp with a pike that had just inhaled a lure. They tried to revive him in the water, but after watching him float upside down for a while, Ray & I said “Sorry Guys. It just doesn’t look like that one is going to make it.”

They looked down at their “Catch of the Day” floating upside down in the water. “Well then, can we cook it?”

“Okay. But pike aren’t like bass. They are full of little “Y” shaped bones, very hard to filet. We will have to cook it whole. I will show you how to clean one. Then how to scale it.”

I’m sure there are folks out there skilled in the art of fileting northern pike. I’ve just never been one of them. So, we set about the task of cleaning and scaling that pike so that we cold, (minus that massive head and all those teeth) cook it over the fire, skin on, whole. Once done, all that was left was to cook it.

It was the weekend. As is generally the case when there are Monroes camped in Bull Rush Bay, we were getting ready for a dinner feast of some kind. I don’t recall what was on the menu that particular day, chickens, steaks or ribs. Whatever it was involved corn on the cob.

We already had a good cooking fire going, so I laid out some foil, then some corn husks on it. I love coming up with new on the spot recipes based on what we have in camp. This was a perfect opportunity for creating another. Ground black pepper, some garlic powder, and a big red onion were obvious choices. I looked in the cooler. We still had some lemons. Then I spotted something else. A jar of dill pickle spears.

“Perfect!” I thought. We’ll stuff it with onions & dill pickles, hit it with pepper & garlic powder, top it with sliced lemon, wrap it in corn husks and foil, and roast it on the fire. That should taste pretty good.

That’s what we did. It turned out great! It’s become my “go to” Camp Chef pike recipe. All my camp fish eaters love it. The dill pickle flavor really comes through. It compliments that mildly distinctive pike fish flavor well.

I wish I’d thought of Dill Pickle Pike a bit earlier in life. I bet if Mrs. Irvine had tasted it, I’d have gotten an “A” in Home Ec.