“And That’s Why You Don’t Prank Your Parents”: People...

December 9, 2021 Comments Off on From Roasted Chestnuts to Sugar Plums: Why Are These Holiday Foods Rarely Seen In Cincinnati Recipes

From Roasted Chestnuts to Sugar Plums: Why Are These Holiday Foods Rarely Seen In Cincinnati 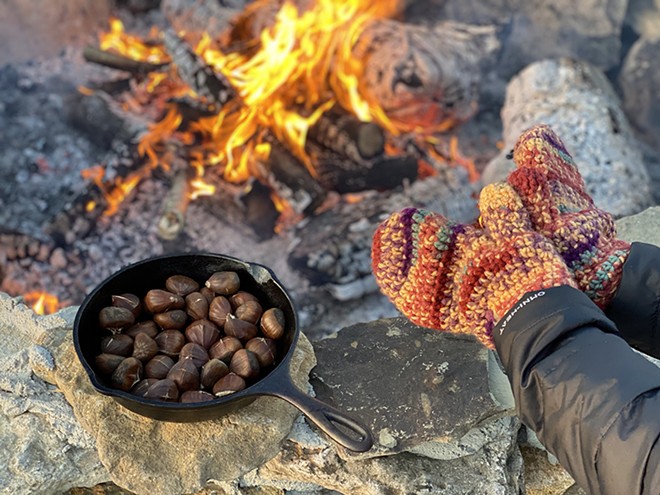 Winter’s almost here, so that means families around the globe are getting sentimental for holiday traditions at the table. While there’s nothing wrong with the standard American go-to dishes like roasted ham, gingerbread or milk and cookies, there are certain foods and drinks that tend to be associated with the holiday season that nobody in Cincinnati really eats anymore — even though we’re aware of them thanks to old holiday songs, shows and books.

So, if you really want to impress your extended (hopefully fully vaccinated) family at the holiday table this year, consider changing up some appetizers and desserts to weirdly familiar-yet-foreign fare that we’ve all heard about but perhaps never got around to tasting.

There’s a very distressing reason we don’t eat many chestnuts roasted on open fires in North America these days. Back around the turn of the 20th century, an infectious fungus was introduced to the American chestnut tree via the commercial import of Southeast Asian chestnut trees, resulting in a catastrophic blight that wiped out an estimated 5 billion trees over the span of 30 years. Chestnut was one of the most prominent hardwood trees in the Eastern U.S., whereas it is now functionally extinct.

The eradication of the American chestnut had much larger ramifications on the environment than future generations simply missing out on a holiday treat: Chestnut trees produce nuts every year and a variety of woodland critters (and humans) depended on them as a vital foodsource, including deer, squirrel and wild turkeys, per the American Chestnut Foundation. Chestnut was so prevalent in woodworking that it came to be known as the “cradle to the grave” lumber, as it was used to build cradles, pieces of furniture used throughout life and, finally, coffins. These days you can still find limited selections of raw chestnuts in stores, but they’re likely imported from Italy or Turkey.

Chestnuts have a peculiar texture compared to more common nuts found on shelves, they’re a bit spongy and the meat is quite sweet. You don’t need to blaze up a full-blown bonfire to enjoy chestnuts; as long as they’re either boiled on the stove or roasted in the oven, you’ll be able to crack open a few while Jack Frost nips at your nose. Make sure to score your chestnuts before cooking so they don’t explode (like a potato in a microwave), and once they’re roasted to your liking (takes maybe 15 minutes), let them cool, peel off the skin and enjoy.

In the classic holiday poem “Twas The Night Before Christmas,” author Clement Clarke Moore (the work was published anonymously before Moore claimed ownership in the 1830s) writes: “The children were nestled all snug in their beds, While visions of sugar plums danc’d in their heads.”

Why would small children be dreaming of sugar-coated fruit? And what exactly does a dancing sugar plum look like, you ask? According to a deep dive by The Atlantic, the concept of a sugar plum may be referencing everything from a literal comfit — a hard-sugar-covered nut or seed, like a Jordan almond, that was once expensive and difficult to make before mechanization — or the general concept of “good things,” ranging from money to compliments. Another interpretation of the sugar plum is a confection similar to what the British call “boiled sweets;” its texture is akin to hard candy, like a peppermint.

So why don’t we eat sugar plums anymore? Because most of us don’t even know what they are. But, for a sugar plum you can make at home, we turn to celebrity chef Alton Brown. Brown has a recipe for “sweet and spicy” sugar plums: by blitzing a mix of dried fruits (including prunes, aka dried plums) and nuts in a food processor you create a kind of paste that’s sweetened with honey and seasoned with cardamom, anise and caraway, rolled into tiny bite-size balls, then coated in sugar. While they sort of resemble rabbit droppings, the flavorful treats are an easy addition to any holiday spread.

If you were hoping figgy pudding would be a custardy pudding like the kind we eat in the U.S., then you’re in for a surprise. This dish is a British-style pudding, like the puffy and savory pastry-like Yorkshire pudding typically served with roast beef. Figgy pudding is a kind of cake made with reconstituted dried fruits, candied ginger, roasted nuts, suet (beef fat), flour and heavy cream. Its pedigree and popularity can be traced to both Medieval (when suet was popular) and Victorian times, and it makes a memorable appearance in A Christmas Carol and the English traditional carol “We Wish You a Merry Christmas.”

Outside of not being a jiggly pudding, this dish is unique because it is steamed rather than baked.

Once the pudding is cooked through, it’s best served with a dollop of cream on top. Chefs often like to add rum or brandy to the dish, while some even go as far as igniting a healthy dose of highly alcoholic spirits poured on top so the figgy pudding lights up like a yule log. The pyrotechnics serve three purposes: it looks awesome; it adds depth of flavor to the pudding after the alcohol burns off; and there’s now an open bottle of booze that’s sure to make the holidays with family much more enjoyable.

Plenty of recipes are available online, including for “flaming figgy pudding.”

Sign up for our weekly newsletters to get the latest on the news, things to do and places to eat delivered right to your inbox.

» Recipes » From Roasted Chestnuts to Sugar Plums: Why Are These Holiday Foods Rarely Seen In Cincinnati