You Won’t Find Any Bourbon in the Beam Family’s...

December 12, 2021 Comments Off on How to Cook a Wild Game Dinner During the Holidays Christmas Dinner, Christmas Recipes, Recipes

How to Cook a Wild Game Dinner During the Holidays 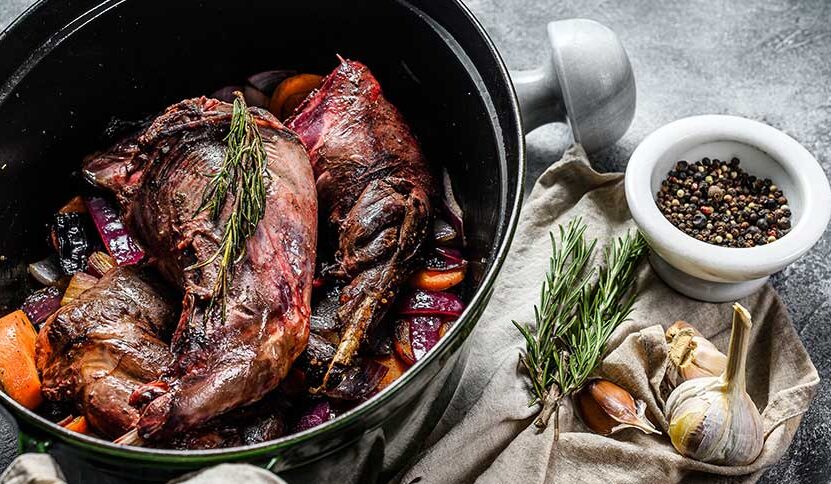 Here are some tips for prepping a wild game dinner for your family or friends.

Do you love wild game meat? Okay, that’s a silly question. You wouldn’t be here if you didn’t.

One of the biggest challenges hunters face with their harvests is often in prepping a wild game dinner for their family and friends. We know what we like, but cooking for others is always a crapshoot.

Some people simply don’t like the idea of eating venison or other popular game animals like wild boar or bear.

So, how do you get past that and serve a wild game feast for your family during this holiday season? We have some thoughts and tips to help you out.

Introducing wild game meat to others

For some reason, people tend to freak out if they find out their meal is wild turkey, venison or a wild rabbit instead of one raised on a farm. We’re not sure why. Maybe it’s the gamey taste of some animals. Maybe it’s just because people can’t get the anthropomorphic animals of Disney out of their heads.

Whatever the case may be, many people have found it a challenge.

Many hunters have decided to go the deceptive route and just not tell their family that pheasant or goose isn’t the store-bought variety. Or they simply mix something like ground venison into that famous meatloaf without telling anyone. We’re not going to tell you that’s the wrong way to go about things. But you should probably think long and hard about it and how your family will take it when you reveal the secret ingredients. For some people it may be better to be upfront about it rather than breaking their trust.

For wary friends and family, a traditional roasted turkey or duck dinner may be just the ticket. Most people seem to have a bigger deal with venison or other big game meats. But birds seem to go over well with everyone even though you may have to ensure them again and again that yes, you cleaned all the shot out of the animal thoroughly!

A traditional turkey or other bird meal

As we mentioned earlier, one of the easiest ways to introduce a wild game meal may be a traditional meal that simply uses a wild bird instead of a store-bought one. If you’re a real wiz in the kitchen, your family and friends may never know the difference.

One thing to keep in mind however is that a wild turkey or other game bird is likely going to taste different than that store-bought bird that was fattened up just for your dinner plate. Turkeys in the wild and ones in captivity have very different diets and it’s going to change the meat. Wild birds are generally going to be leaner than a store-bought one. This means you must be careful to avoid the risk of over-cooking.

Meat from wild turkeys especially can be a bit on the dry side, but there are ways to combat this. You could try the “beer can turkey” method, you could try turkey broth, you can try brining it. If you have an especially tough old bird, you can even try deep frying it if all else has failed or if you’re just looking for something different.

Whatever kind of bird you’re preparing, we’ve found people are less apt to get freaked out over a goose, duck or turkey than other kinds of wild game. And they’re traditional Christmas and Thanksgiving table fare. That makes any of these dishes a good starting point for introducing a somewhat reluctant group of friends and family at your upcoming events for the holidays.

If you still have a family member who is hesitant, remind them the birds in the wild are eating an all-natural diet and they haven’t been pumped full of drugs or growth hormones. This makes them a MUCH healthier option than the store-bought bird you ate last year!

Venison and other big game

This is where things can get a bit trickier. I’ve seen so many people immediately recoil at the idea of eating venison over the years. That’s why we don’t recommend starting an annual wild game dinner with a huge emphasis on deer, elk or moose meat.

Instead of starting things off with a large venison roast main course, try a smaller optional side dish instead. For instance, my mom makes some killer BBQ meatballs that go with just about any dinner. We’ve brought them to holiday family gatherings for years and they’re always popular. They’re good with just plain beef. But venison adds a little something extra. Just remember that venison is quite lean and most side dishes are going to work better if you mix in some beef.

Mixing in beef or other meat is a good way introduce people hesitant on big game meat into giving it a try. For a casual office Christmas party, you could try bringing in venison tacos. You could also try a meatloaf. Some other somewhat different side dish options might include a venison lasagna, stew or chili.

Don’t forget about venison backstraps if you still have some from this year’s harvest. You can cut these into small steaks that are sure to be popular. Another option is to do something few people can resist. Add bacon. Because bacon goes with everything, even venison! Try a stuffed and bacon-wrapped backstrap or tenderloin. Another option with bacon is to make jalapeno venison/bacon poppers. These are sure to be a hit with the family before the main meal. Play your cards right and your small wild game meat introduction may open the doors to making your deer or hog a larger part of the meal next year as a rabbit stew, rib roast, wild hog ham or venison sauerbraten.

Whatever you do, just make sure you do a bit of work ahead of time to work on that gamey taste. Try soaking the meat in milk, yogurt, vinegar, lemon juice or saltwater. Also make sure you marinade well. The more you can eliminate any gamey taste, the more well-received the meal will be.

Our ancestors very likely all hunted for their holiday meals. Serving up wild game meat for your holiday dinners gives you a chance to go back to your family’s roots. Because as we all know, meals just taste better when you know exactly where that meat came from.

At the same time, you don’t need to pretend you’re one of the pilgrims at the first Thanksgiving either. We have a ton of resources at our disposal to make game meals more delicious than ever. Don’t be afraid to embrace modern technology, cooking methods and ingredients. Don’t be afraid to try a new recipe this year for either the main course or just a side dish.

Use this creativity for gatherings of family and friends. Especially if they’ve been picky about wild game before. Sometimes you must start small for the first time. Even just a platter of cheeses, venison salami and crackers appetizers can be a bit hit at any holiday gathering and open the door for bigger, more elaborate wild game feasts in the future.

Be creative, combine tradition with the new, and you’re sure to have a successful dinner of wild game with your family that will have them traveling cross country for your cooking for years to come!

NEXT: 5 GROUND VENISON RECIPES THAT WILL BECOME YOUR GO-TO

» Christmas Dinner, Christmas Recipes, Recipes » How to Cook a Wild Game Dinner During the Holidays