Cook a Fish, Give A Fish Class Teaches You... 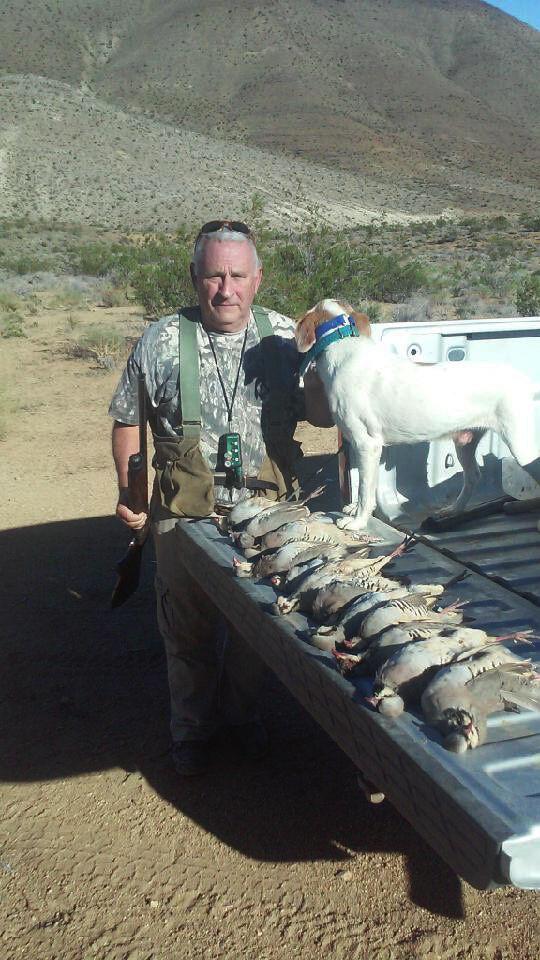 Pictured is local resident Roy Jacobs with a nice bevy of chukar partridge taken during a hunt, with his cousin Larry Merlo, near Garlock in eastern Kern County. Photo courtesy of Larry Merlo Readers may recall that in past columns I’ve mentioned being an old movie buff. I often […]

Readers may recall that in past columns I’ve mentioned being an old movie buff. I often use the website called Internet Movie Data Base, where it’s possible to enter errors, or “goofs,” that you might see in films.

At the present, I have over 100 entries logged. You’re probably wondering what this has to do with today’s column. Well, two of my entries concern the chukar game bird. There’s a scene in an old western film called “Catlow” where a cowboy is riding his horse through the hills, and a chukar is shown standing next to him on a rock.

Then, there’s the film “Once Upon A Time In The West” with a scene near the beginning of a man shooting game with his son.

The boy retrieves some downed birds and hands them to his father. They’re chukar partridge. The problem with both of these depictions is that there were no chukar in the U.S. during the 1800’s when these stories took place.

They were not introduced into this country until the 1920’s when the U.S. Fish & Wildlife service imported them from Afghanistan and Nepal.

The government was trying to establish them as a low lying desert bird for hunters with the same habitat they were accustomed to in Asia. But, they didn’t take into account that the birds were used to altitudes of 2,000 to 13,000 feet above sea level.

As a result, the local birds headed for the high desert regions in this country.

The first time I was fortunate enough to hunt these birds was back in the mid-60’s with my long-time friend Fred Bundy, who lived in the Lake Isabella area. There was a small group of us who headed for the Red Mountain region below Ridgecrest.

This was high desert with steep hills and rocky terrain. The plan was to leave a vehicle at the base of a high ridge, and have everyone load into a second one and drive to the top. We would then hunt down the hill while hoping to flush birds along the route.

After reaching the bottom, two guys would drive back up and retrieve the vehicle on top.

During the 1950’s, the state began to erect artificial water holes, called “guzzlers,” into the desert areas of California to help local wildlife.

Knowing where these were really helped insure a good chukar hunt because the birds were usually not to far from them. Usually a few hundred yards, or so. But, we would not just stand by them and wait for the game to appear.

That was not good hunting. After flushing birds, they would take to the wing very quickly and fly up to a half mile or more away.

Over the years, I had some really good hunts all over the area of eastern Kern County.

At the end of this column I am going to give you the recipe for cooking these great eating birds that was included in my old pal Steve Merlo’s book, “The Official, Can’t Live Without It, EASY, Wild Game And Fish COOKBOOK.”

But first, let’s hear some of his words about hunting chukar.

“Steep canyon walls, high ridges and rocky crags at lung-busting elevations are home to these pigeon-sized creatures. A fleeing chukar runs uphill and flies downhill, staying comfortably out of shotgun range until it reaches the top of whatever mountain it’s scaled. Once there, and you guessed it, it flies to the bottom of the next canyon a half-a-mile away, fooling who-or-whatever’s in hot pursuit.”

INGREDIENTS: 4 plucked or skinned chukars, split in half. . . . Salt and pepper. . . Olive oil. . .6 cloves crushed garlic. . . . Rub the birds with olive oil and garlic, then salt and pepper each half inside and out. Broil or barbecue over medium heat (about 400 degrees) turning often so they don’t burn. Baste occasionally with a mixture of olive oil and garlic until done. I usually check the breast meat near the breast bone with a sharp knife and when it’s turned a moist white, serve ’em.