7 Common Foods Eaten in the 13 Colonies

August 27, 2021 Comments Off on Underrated Wild Game Cuts All Hunters and Anglers Need to Try Recipes 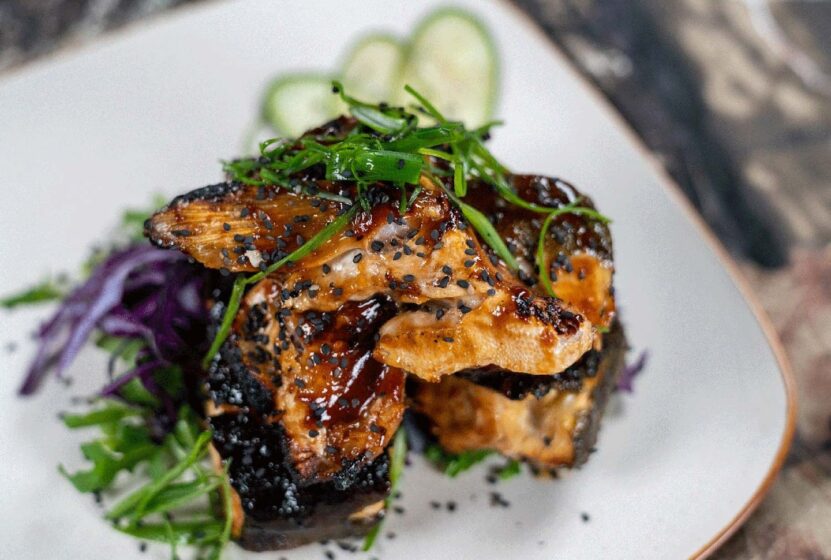 Don’t miss out on these fish, fowl, and red-meat cuts that are often tossed in the grind pile or left behind

I’m as much of a fan of grilled backstrap and venison chili as the next guy, but hunters and anglers are missing out when they stick to the same old cuts and recipes they’ve always done. Many interesting and tasty cuts end up in the grind pile, or worse, left in the field due to lack of knowledge, imagination, or just plain laziness. Why we’re often uninspired, and even squeamish about food, is a matter of cultural debate, but the good news is that it doesn’t have to be that way. With an open mind and some basic butchering skills, the culinary possibilities of wild game and fish are endless. Here’s a small list of underrated cuts and some tips on how to use them to help you make the most of your success afield. So the next time you set the hook or pull the trigger, add these awesome cuts to your list.
Neck Roasts and Shanks From Deer, Elk, Antelope, or Moose
Neck roasts are one of those cuts that are often ground into burgers and sausages but really shouldn’t be. The neck of a big game animal, especially on a buck or bull, is a muscle that has to put up with a lot of abuse. As such, it’s inherently tough and woven with stringy sinew. But when treated properly, neck roasts easily make for some of the best tasting meat on the animal. I prefer slow braises and crockpot recipes for neck roasts and similar cuts. The tough and stringy meat becomes tender and succulent, and the connective tissue breaks down and provides plenty of moisture and fat during the cooking process.
Neck roast meat is silky smooth and stringy in a good way. It’s perfect for recipes such as “pulled” meat sandwiches, nachos, ragouts, and pasta sauces. A lot of hesitancy about neck roasts comes from the very reasonable fear of ingesting spinal material that could potentially hold scary diseases. However, removing all spinal fluid and material and following proper field care and butchering practices on healthy animals can pretty much eliminate any real or perceived risk. 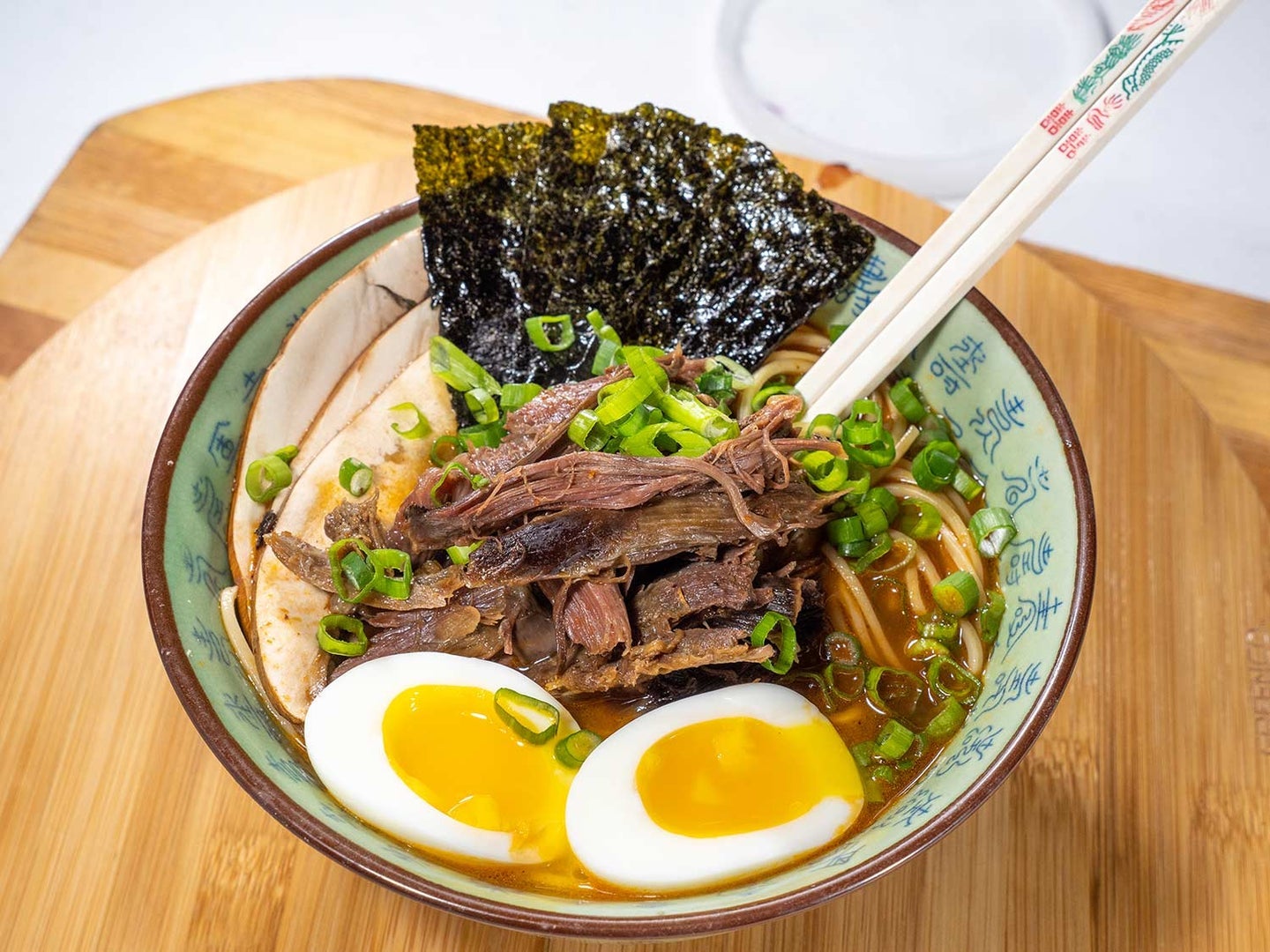 Ramen made with venison shank meat. Cosmo Genova
Shanks are in a similar category to neck roasts in terms of the lack of respect they get as well as the type of recipes they can be used for. The shank is basically the section of leg from the ankle to the knee. As a weight-bearing and heavily-used muscle group, the shank is inherently tough and stringy. Shanks are often deboned and ground and even left in the woods by some hunters. But similar to lamb shanks, those from big game animals such as deer, elk, and antelope are incredibly tender and delicious when cooked properly. Slow and low cooking methods help tenderize the meat and soften the connective tissue, while the bones, cartilage, and marrow provide flavor and natural juices. Slow braises and crockpot recipes with plenty of moisture can transform those tough drumsticks into a tender, unctuous, damn-near heavenly meal. Many cultures around the world have delicious shank recipes that are worth making, and most simple braised meat recipes can also use shanks.
Big Game Ribs
Ribs are perhaps the most criminally neglected and underrated piece of wild game. Typically deboned and ground, or discarded altogether, ribs deserve much more appreciation than they often receive. To be fair, there’s not a ton of meat on the ribs of wild critters, and the fat cap is generally pretty waxy and unpleasant unless removed. But with the right treatment, wild game ribs can be absolutely delicious either eaten on the bone or incorporated into another dish. 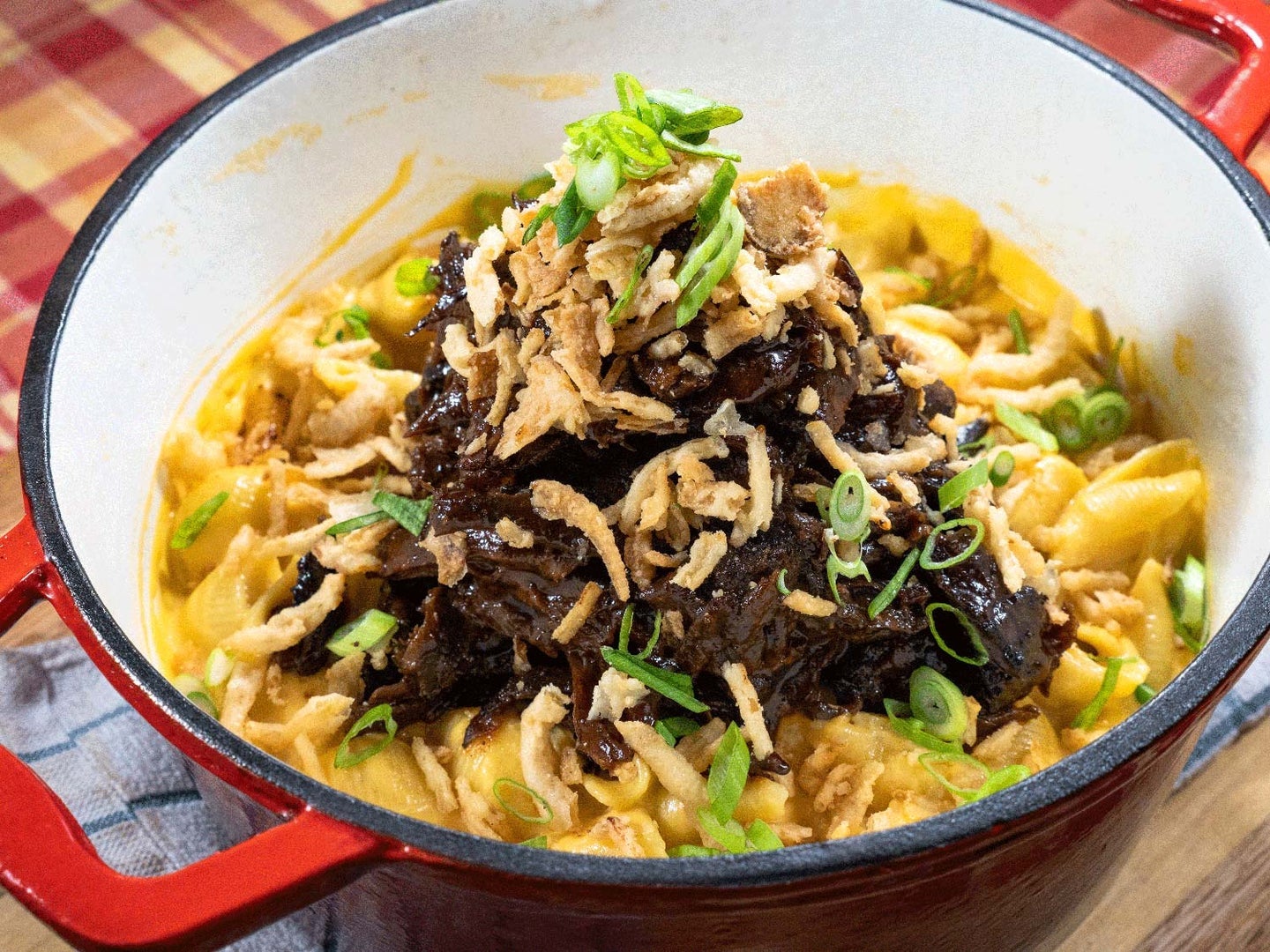 Venison rib mac and cheese. Cosmo Genova
Most of the misunderstanding around ribs comes from poor cooking technique. People throw them straight on the grill or in the oven and expect them to come out like a rack of tender pork baby backs. The simple trick to wild game ribs is cooking them in multiple steps. You need to break the meat down first in the crockpot or with a slow braise. Once the meat has cooked through and softened, it’s time to apply a dry rub, then bake or smoke them before a final lathering and glaze of barbeque sauce. This three-step system is a foolproof way to enjoy tender and delicious game ribs. I like to eat them right off the bone, or scrape the meat off to use for other recipes.
Organs and Odd Bits
The cultural aversion to eating organs is all in our heads. I understand some people’s dislike of liver, but heart, and even tongue, are objectively good. Hell, even gizzards and kidneys don’t taste half bad when processed and cooked correctly. Heart in particular is some of the most nutritious, tender, and best tasting meat there is. On big game animals, the heart tastes a lot like a piece of tenderloin and can be pan-seared, fried, and even pickled. The slightly springy texture of heart is often what throws people off, but when cooked like a rare piece of steak and sliced thin, heart is almost indistinguishable from, if not better than a piece of loin or muscle cut. And if you’re a small game hunter, skewered and grilled hearts are a great way to make the most of your squirrels, pheasants, ducks, and other small critters. 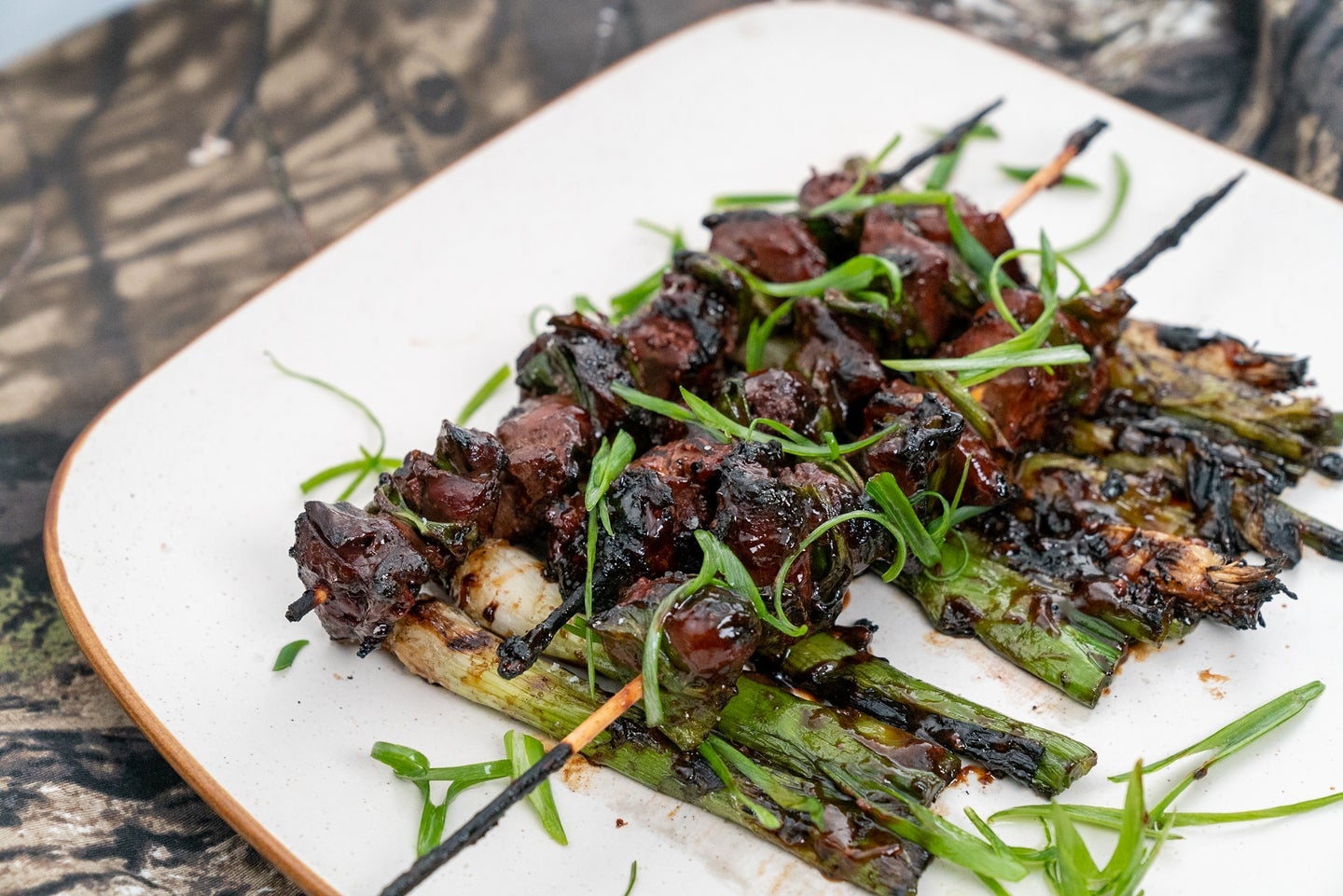 Skewered small game organ meat yakitori. Cosmo Genova
If you like beef or chicken liver, wild game livers are absolutely worth saving. There is a pervasive idea that livers are “dirty” due to their function in filtering blood, but that couldn’t be further from the truth. Liver is mineral-rich and incredibly nutritious and there are a ton of ways to cook it. Liver pate is my favorite way to cook and eat liver, and I have converted many people, who, like myself—have mixed, or even negative feelings about pan-fried liver.
Eating tongue is not something the majority of hunters think about, but it is delicious when cooked properly. I grew up eating beef tongue cooked in stews and sliced thin like sandwich meat. It is a popular cut in many countries. If you can get over the idea of eating it, the tongues of deer, elk, moose, and other game animals are absolutely worth keeping and cooking. Once the tongue has been boiled and the outer membrane scraped off, tongue can be used in a ton of different recipes. As one of the fattiest pieces of the animal, the tongue has a meaty, almost pork-like flavor and texture. I usually sear or braise tongue for tacos, brine and slice it like corned beef, or pickle it as a bar snack.
Fish Collars, Heads, and Bones
The collars and heads of large fish and bones of small fish are overlooked but delicious. The collar refers to the section of meat directly behind the gill plate. This part is often discarded once the fish has been filleted, but it is a delicacy when saved and grilled. Simply remove the head and gills and cut through the meat and spine a few inches behind the pectoral fins. Once you have the collar section separated from the body, split it down the spine lengthwise and toss it in your favorite marinade before throwing it on the grill. This overlooked cut is meaty and delicious, especially on larger fish such as salmon and trout. The collars and pectoral fins of smaller fish such as walleye are often referred to as “wings” and can be cooked similarly.
While the idea of fish heads may not be appetizing to some, they have several great uses. Fish heads can be split and grilled for their tasty cheeks, or used for fish stock or a fish-head soup recipe. And, believe it or not, the bones of small fish are not only edible, but delicious. The next time you filet a pile of panfish, save the bones and fry them in hot oil. The skeletons will come out crispy and the whole thing—fins, tail, bones, and all can be eaten like a potato chip.
Wild Fowl Wings and Legs
The wings and legs of wild birds are dramatically underappreciated. Legs and thighs in particular are often discarded once a bird has been breasted, but they are absolutely worth saving. The legs and thighs of waterfowl and other game birds can be braised or turned into confit, which is a method of slow poaching in fat or oil. Confit tenderizes the meat and makes it juicy and succulent. The meat can then be pulled and used for a variety of recipes. 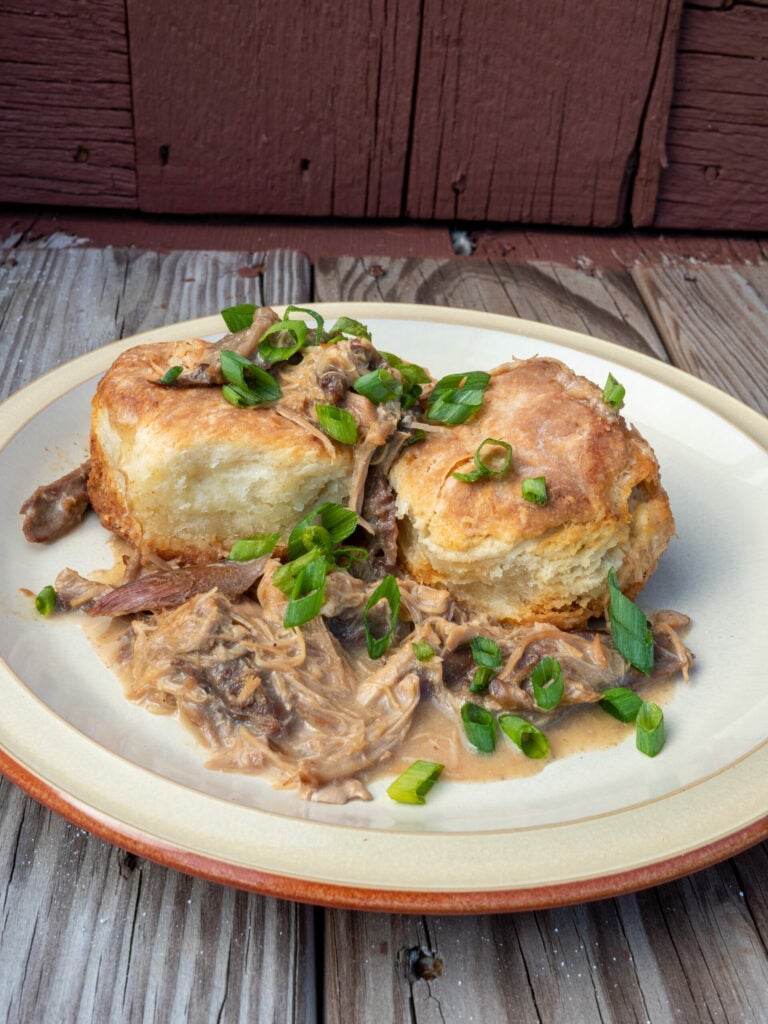 Turkey leg and thigh meat with biscuits and gravy. Cosmo Genova
Wild turkey legs and wings are also delicious when cooked properly. Although they are extremely tough and sinewy, slow cooking methods will break down the connective tissue and tenderize the meat. I like to turn my wild turkey legs and thighs into a delicious gravy to be eaten with biscuits or dumplings, or used as the base for a pot pie filling. While often discarded, wild turkey wings can be plucked, par-cooked, and either baked or fried like chicken wings.