Too tired to cook? This pho-inspired flank steak wrap...

September 25, 2020 Comments Off on WATCH NOW: He’s a master with the grill Recipes

WATCH NOW: He’s a master with the grill 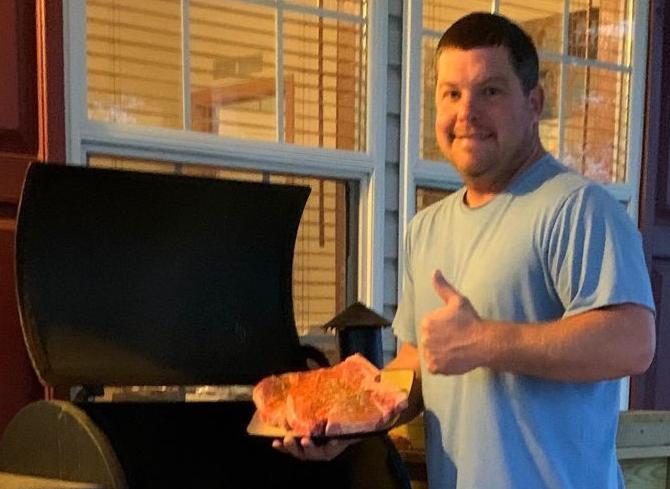 Matt Kendall grew up cooking, eventually turning himself into a grillmaster. Now he shares his recipes so others can enjoy dinner as much as he, his family and his friends (occasionally 150 of them) do.

When he was a boy, he helped his “Papa Max” Kendall cook breakfast for the family hunting club.

“I was always eager to show up early and help him cook breakfast for the hunters, as our day of deer hunting started with a big breakfast before daylight,” he said.

As he got older, he learned to cook “more than eggs, bacon, fried deer tenderloin and butter toast,” he said, eventually taking his skills to the next level: out of the kitchen and outside to the grill.

Now he enjoys cooking for his family, wife Nicole, 8-year-old son Cooper and 7-year-old daughter Emma, at their home in Axton. He works at Taylor Steel, which is headquartered Ohio.

He likes fried food, but nothing beats grilling, he said, especially if it’s “a good medium steak, chicken or vegetables.”

His techniques continue to improve as he regularly looks up new recipes, such as creatives ones like beer can cabbage slicers, or “a simple twist on a dish to make it fun.”

With experience, “you develop your own style of cooking with your own favorite seasoning and the ability to quickly look at a recipe and decide if it fits your style or how you want to change it to make it your own,” he said.

His favorite seasonings are olive oil, salt, pepper and garlic: “After watching cooking shows for years on TV, I came to the conclusion that they put these ingredients in everything.”

He takes advantage to ask for the recipes of any food that impresses him while he’s out, such as for Brenda Jackson’s potato salad. If he can’t get the recipe, he tries to analyze the food and figure out how it’s made.

Kendall enjoys cooking for crowds, in which case he’s learned to “keep it simple,” such as fish fry, fajitas, chili, low country boil and barbecue. His feasts are in such demand that he’s cooked for many friends’ weddings.

He said he thrives on challenge, and “having good, hot food cooked on time, and presented seamlessly for a bride on her special day, ranks pretty high on the list.”

A low country boil he made for 150 people at a friend Chad Dodson’s wedding was 10 pots of potatoes, corn, sausage, chicken, carrots, onions and — of course — shrimp, “out on a 24-foot assembly line, and the crowd loved the idea. It was very fun and different.”

One day, a UPS driver said he recognized Kendall from somewhere, but Kendall couldn’t figure out where – until the driver said, “‘You have a catering business and do weddings, right?’

“I laughed and said I was cooking at a wedding last weekend, but I just cook for fun,” Kendall said.

Every wedding for which he cooks “is my ‘last one’ until another friend gets hitched.”

For those who like to grill (and Kendall would encourage that anyone could cook that way), he recommends his favorite type of grill: a pellet grill.

Pellet grills are fueled by small pieces of hardwood, such as mesquite, hickory or cherry, each of which gives its own unique flavor to the food. The wood pellets are set on fire, which heats the cooking chamber. Intake fans bring in air to disperse heat and smoke throughout the cooking area. Pellet grills give precise temperature control, like with an oven, usually ranging from 180 to 500 degrees.

The wood pellets “add awesome flavor to everything,” Kendall said.

He uses his grill “like an oven, cooking meats, sides and even desserts like apple pies, pumpkin pies and cobblers in it. My kids love cooking pizzas on it, and we even cook lasagna on it, which my wife makes an amazing lasagna. You can cook at any temp and slow it down and smoke those pork butts. It’s my go-to for all my cooking.”

He first tried shrimp potato salad at a NASCAR race. “I could not put my finger on what was different about this potato salad. I finally ask the server what it was. He told me [it was] shrimp potato salad. As soon as I got home I Googled me up a recipe. I read a few and found one that fit my style, and it is amazing.”

The beer can chicken “is a simple, fun way to cook a whole chicken in a grill or in the oven. If you have heard of it and never tried it – it’s time.”

Prime rib always had seemed “like a restaurant-only dish until one day I decided that if the restaurant can cook one, so can I,” he said. “It’s super easy.” Since it’s pricy, he added, he only makes it for special occasions.

He learned about tomato pie from his friend, Sonny Wade, and thought it sounded good. “I went home, found me a recipe and had my first tomato pie, and boy was it good. It’s my favorite new summer dish, so I thought I must share it with you.”

Barbecue is a favorite food to cook, and he’s been told “more times than one that I’m good at it” – and side dishes are popular, too.

Kendall encourages everyone to give cooking a try: “Find a recipe that looks good, and get after it! You will be glad you did.”

» Recipes » WATCH NOW: He’s a master with the grill