How to Cook a Wild Game Dinner During the...

December 10, 2021 Comments Off on You Won’t Find Any Bourbon in the Beam Family’s Recipe for Venison Poppers Cooking Venison, Recipes 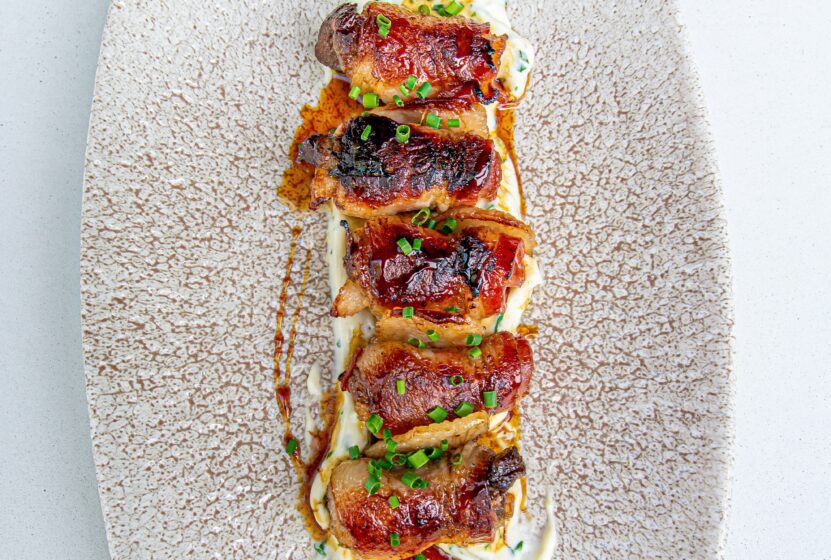 The sixth straight member of the Beam family to serve as Jim Beam’s master distiller, Frederick “Booker” Noe II has cooked up a lot more than the uncut, unfiltered, small-batch bourbon with which his name is synonymous over the four decades he’s presided over the distillery. The son of Jim Beam’s daughter Margaret Noe, Booker also made barbecue a staple at Beam family gatherings in Kentucky, and his signature method to prepare the meat was to flambé it using his namesake bourbon for added smoke and flavor.

Thanks to Booker’s fondness for barbecue, backyard classics like smoked sausage and a traditional pulled pork sandwich can be found on the menu at The Kitchen Table, a new restaurant located on the James B. Beam Distilling Company’s campus on the Kentucky Bourbon Trail that serves up many of the same foods that once crossed the Beam family’s still-in-use kitchen table.

Chef Brian Landry, who helped curate and craft the restaurant’s menu based on conversations he had over many drinks and dinners with Booker’s son Fred and grandson Freddie, wasn’t able to work bourbon into The Kitchen Table’s fresh take on venison poppers. But he at least partially made up for it with another “B”: bacon.

A native of New Orleans, Landry designed his bacon-wrapped interpretation of the beloved family BBQ dish with ingredients that are complementary to the spirits in the Beam portfolio.

“In south Louisiana we make something similar with duck because duck hunting is a huge thing in the marshes and coastal area of Louisiana. This version is more based on what you’d typically find at a hunting camp,” Landry tells InsideHook. “We use a cut of venison called the Denver leg and cut it into strips then season it with the Creole seasoning and sear it. It’s then wrapped in bacon with pickled jalapeno peppers. At a hunting camp, everybody will try to get cream cheese into the actual popper. We whip cream cheese with herbs and lemon zest and put that as a schmear on the bottom of the plate instead. The poppers are grilled and finished with a gastrique of equal parts cane syrup and Sherry vinegar. You end up with spice from the Creole seasoning, smoke from the bacon, some herby lemon pop from the cream cheese and nice sweetness from the gastrique. It’s basically a restaurant version of a hunting camp dish.”

Of course, due to the namesake ingredient in the poppers, the dish is also undeniably a bit gamey, Landry admits.

“Venison has a strong flavor profile and that tartness you find in wild game. But for anyone who would be scared off by venison, I think they’ll actually be shocked at how mild it is,” he says. “It’s not gamey to the point of like, ‘Oh, I don’t like this.’ It just has more flavor. Cooking on a distillery campus, you’re looking for foods to stand up to all of the nuances in the craft of making bourbon.”

As well as dishes that pair nicely with the distillery’s signature product.

“It is a strong dish, so I would look to a higher-proof bourbon of probably 100 or above when trying to pair it. And I would look for something that leans towards spicier,” Landry says. “I think the tiny bit of sweetness we add at the end with the gastrique will actually draw out whatever caramel notes are in the bourbon. I would look to something like a Baker’s or a Booker’s if I was going to do a pairing with the venison popper because I think those higher-proof bourbons will stand up to the Creole spice, the smoke from the bacon and the fact it’s charred on a grill.”

Only one way to find out …

This article was featured in the InsideHook newsletter. Sign up now.

» Cooking Venison, Recipes » You Won’t Find Any Bourbon in the Beam Family’s Recipe for Venison Poppers